David Shaw has told me to stop harping on about my broken thumb and man up, I don't tend to take advise from David so here is my blog.

One week before the 3 Peaks I rode the YCCA event at Thornes Park, Wakefield.  Due to too much enthusiasm and a lack of skill I ended up in a bit of a heap after a couple of laps.  Sore thumb, few bruises and a rolled off tub.  Finished 21st Vet 40!! After a trip to A & E the following day my thumb looked like this. 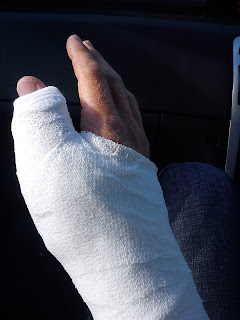 Thumb was slightly fractured, small chip off the bottom of the first phalanx.  Nowt too serious, the pot was a bit overkill but had to wait a few days to see someone at fracture clinic and get a more sensible wrist brace. The nurse didn't actually say I could ride a bike but she didn't say I couldn't. 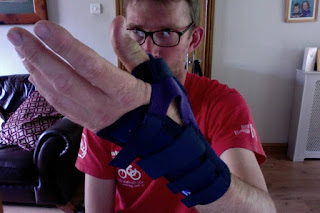 Previous to all this my 3 Peaks training had gone OK, I'd done a fair bit to off road riding with my daughter and done a couple of long rides including Emma Osenten's Mary Townley Loop ride which was rather testing on a cross bike.

Anyhow enough of all the pre amble.  What a nice day it was on the morning of the 3 Peaks bit chilly and foggy but once at Helwith Bridge it was bright sunshine.  Got a better start position than normal , felt very average on the road section but was doing OK and plodded up Ingleborough as per usual.  Guy next to me said "is that the top" when we'd nearly finished clambering up Simon Fell "er not quite". Got to the summit in the same time as 2014 when I'd scraped in under 4 hours for the event.  Descent was pretty ropey and had one fall which was bad enough, then the back wheel of my bike decided to whack me on the head for good measure. Front wheel had gone a bit skewiff and was rubbing on the forks so fixed that and tried to find a group to tag onto on the road section to Whernside.

No big groups and did a bit too much at the front meant I was getting a bit goosed and was struggling to drink enough.  As a result cramp started to hit me on the steps of Whernside, not a good sign with PYG still to come.  Enough writing here's a nice photo of me at the top courtesy of Gilly Dukes.

That was good wasn't it?

I'd taped some card onto my top tube with my split times from 2014 as a guide so I knew how I was doing, not too bad as it turned out, only about 5 minutes off and Peter Dukes (top dibber) told me that Chris Ward from my former club Huddersfield Star Wheelers was just in front.

The descent of Whernside was the bit I was dreading with my injury and it was quite unpleasant.  But saying that I got down OK, passed a load of riders having punctures and found some nicer lines away from some of the rougher sections and passed quite a few people.  Slight mix up with my amazing support crew (Emily, Ruby and Dylan) meant I had to stop longer at Ribblehead to get more water but other than that it was hunky doryish.

Once again struggled to get in a big group on the road to PYG and did too much at the front, did catch up with Chris though who was pretty spannered, that's the technical term for being quite tired.  Engaged my super low gear at the bottom of PYG lane and all the riders who were complaining they couldn't do a turn at the front on the road proceeded to pass me:-( I'd realised by this point that Under 4 hours wasn't going to be doable as I'd lost too much time and I was pretty much done in, arms were knackered, back was knackered and every step near the top was greeted with cramp attacks.

The descent was just grim, in previous years I've flown down, but this year it was just too painful and was really struggling to control the bike and every bump was killing my thumb.  John Docker and Chris from Star Wheelers had got past me and then Paul Milsom (Paul Milnes RT) who was descending like a lunatic.  It was a great feeling to get to the road and I sprinted off after Paul and with the help of Heather Tuffs (Clifton CC) we caught him up.  Paul got from the summit to the finish in 20 minutes it took me 26!!

Finished in 4.16.31 which I'm happy with, although the weather was glorious conditions were harder than in 2014 because it was so warm and the ground was wetter.  155 riders under 4 hours this year compared to 178 in 2014. That PB will have to wait till next year when thumbs crossed I'll be fully fit.

Thanks for all the support on the day, got loads of shouts of encouragement from spectators and other riders.

Time for a shameless plug.  Team Cystic Fibrosis, the team I ride for, are promoting a Cyclo-Cross race at Wentworth Castle Gardens on Sunday Nov 15th if anyone fancies it?  It's got a really cool bridge.